A Trip to Remember

In March 2015 I was given the opportunity to make my first trip to Brazil accompanying two Spix’s Macaws bred by ACTP that were being donated to the Brazilian Government and its people; Brazil of course being the original home of this incredible and beautiful parrot. This incredibly significant and historic handover took place on World Wildlife Day 2015. All I can say is “what an incredible experience”!

After the official commitments were over, we took the opportunity to spend a few days getting acquainted with some of Brazil’s incredible wildlife. At the top of the list was a trip to the area that is home to the world’s largest parrot, the incomparable Pantanal. We flew into Campo Grande, from here a driver then took us to a small aerodrome on the outskirts of the city, from where we would take our flight into the Pantanal.

After an approximately 20-minute drive the car pulled up alongside the small 4-seater Cessna aircraft, and the pilot, who not surprisingly spoke very little English and was mid-way through his pre-flight checks, greeted us. The gear was loaded, seatbelts fastened, and we were off down the dirt runway, up, up and away!

Though obviously far from being the first time I had flown, it was by far the smallest plane I had ever travelled in and it must be said that I was somewhat nervous on take-off and then again around half way into the 30 minute trip when we had to divert from our flight path to avoid a strong, but isolated rain storm. Whilst it was a little unnerving to be in such a small aircraft flying around the edge of a storm, it was undoubtedly amazing at the same time!

Getting my first look at the Pantanal from the air was nothing short of incredible and coming into land on the grass runway next to the Pousada Aguape Lodge, where we would be staying the night was a thrill to say the least…but the best was certainly still to come…

The moment I stepped out of the plane I heard it, the familiar call of large macaws, as if the adrenalin wasn’t already pumping enough, it was through the roof now; it was unmistakable, the calls I was hearing belonged to the one and only Hyacinth Macaw Anodorhynchus hyacinthinus. I ran in the direction of the sound, and before I knew it a very long held dream had been realised, I had seen the most majestic of macaws in the wild for the first time!

I first saw a pair flying some 150-200m away, then another and another as they alighted in the tops of tall palm trees. With camera in hand, I quickly made my way to where they were, my hands were shaking with excitement, but trying my best to hold it steady, I fired off my first shots of these magnificent creatures. After observing them for some 20-30 minutes, in total awe of their breathtaking beauty, I made my way into the lodge to check in.

After a quick freshen up, I walked outside, camera in hand again of course, to check out the rest of the surroundings and to my absolute delight there were more Hyacinths flying in, others were perched in the surrounding palm trees and yet more were eating from a purpose built trough that was filled with palm nuts for them to enjoy. Finding them was proving simple; deciding when I had taken enough pics was the hard part!

To make this magical afternoon even more so, it was not long before I saw my first ever, wild Toco Toucan Ramphastos toco as well, another long-held dream fulfilled! I spotted the first of the Tocos as it flew in and alighted on a palm frond on the opposite side of the tree to a couple of the big blue guys – what a thrill to see both these amazing species sitting in the same tree. Two more Tocos soon came into view, along with yet more Hyacinths. To say that I was in my element would have been a huge understatement; I truly was living a dream!

Another species that I observed that afternoon, which was common around the area, was the Southern Crested Caracara Caracara plancus. They were not at all shy and were present around the lodge throughout the day.

Night fell and it was time for a delicious dinner of Brazilian style roasted meats, followed by a night safari on the back of an old army type jeep. Although we didn’t see too many animals out that night, it was wonderful to see a big family group of Capybaras Hydrochaeris hydrochaeris and a small number of Common Potoos Nyctibius griseus, a nocturnal bird similar to Australia’s Tawny Frogmouth.

The next morning, I awoke to the calls of many birds, including the Hyacinths and quickly grabbed my camera and headed to breakfast. I was delighted to see a large flock of Nanday Conures Aratinga nenday feeding on seed that had been thrown across the ground for them, adjacent to where breakfast was being served. It was amazing to see them in such a number and up so close, their plumage was vivid and more than made up for their loud chatter.

I soon also noticed a number of cardinals, both Yellow-billed Paroaria capitata and Red-crested Paroaria coronata, with the former being the more common of the two, along with a couple of Saffron Finches Sicalis flaveola, Plush-crested Jays Cyanocorax chrysops and Rufous Horneros Furnarius rufus. To cap it off, just prior to finishing my breaky, three Toco Toucans landed in a tree no more than 10 metres from where I was sitting, making their arrival known with their loud and unusual croak-like call. They were very obliging, hanging around long enough for me to fully appreciate their breathtaking beauty and of course take numerous snaps of them – boy oh boy what a way to enjoy a delicious breakfast!

Next on the agenda was a boat trip on the river. We set off and soon saw another new bird species, the Ringed Kingfisher Megaceryle torquata; they were quite plentiful, generally perched along the clear parts of the banks of the river. During the trip we also saw Amazon Kingfishers Chloroceryle amazona, Cocoi Herons Ardea cocoi, a Rufescent Tiger-Heron Tigrisoma lineatum marmoratum (at nest), a Brazilian Anhinga (Darter) Anhinga anhinga, numerous small birds and some more macaws, which although I only observed briefly from a distance, I am confident that they were Blue and Golds Ara ararauna. A curious otter even made an appearance at one point.

Upon returning to the lodge, I wandered off to spend some more time observing and photographing the Hyacinths and was also thrilled to see a number of Swallow-tailed Hummingbirds Eupetomena macroura and Canary-winged Parakeets Brotogeris chiriri. I was even treated to the sight of a pair of Scaly-headed Parrots Pionus maximiliani aka Maximilian's Pionus, that I heard calling from the top of a tall tree just prior to our departure.

Unfortunately, we had a tight schedule to keep if we were to get back to São Paulo in time to catch our flight back to Berlin and so we had to bid the Pantanal farewell only 22 hours after our arrival. As we again set off in the little Cessna, I was still buzzing with excitement from everything I had seen in the short time since our arrival the previous day, but at the same time I was saddened at having to leave so soon. This had been one of the most incredible and moving experiences of my life and is one I surely hope to repeat one day – I will be back! 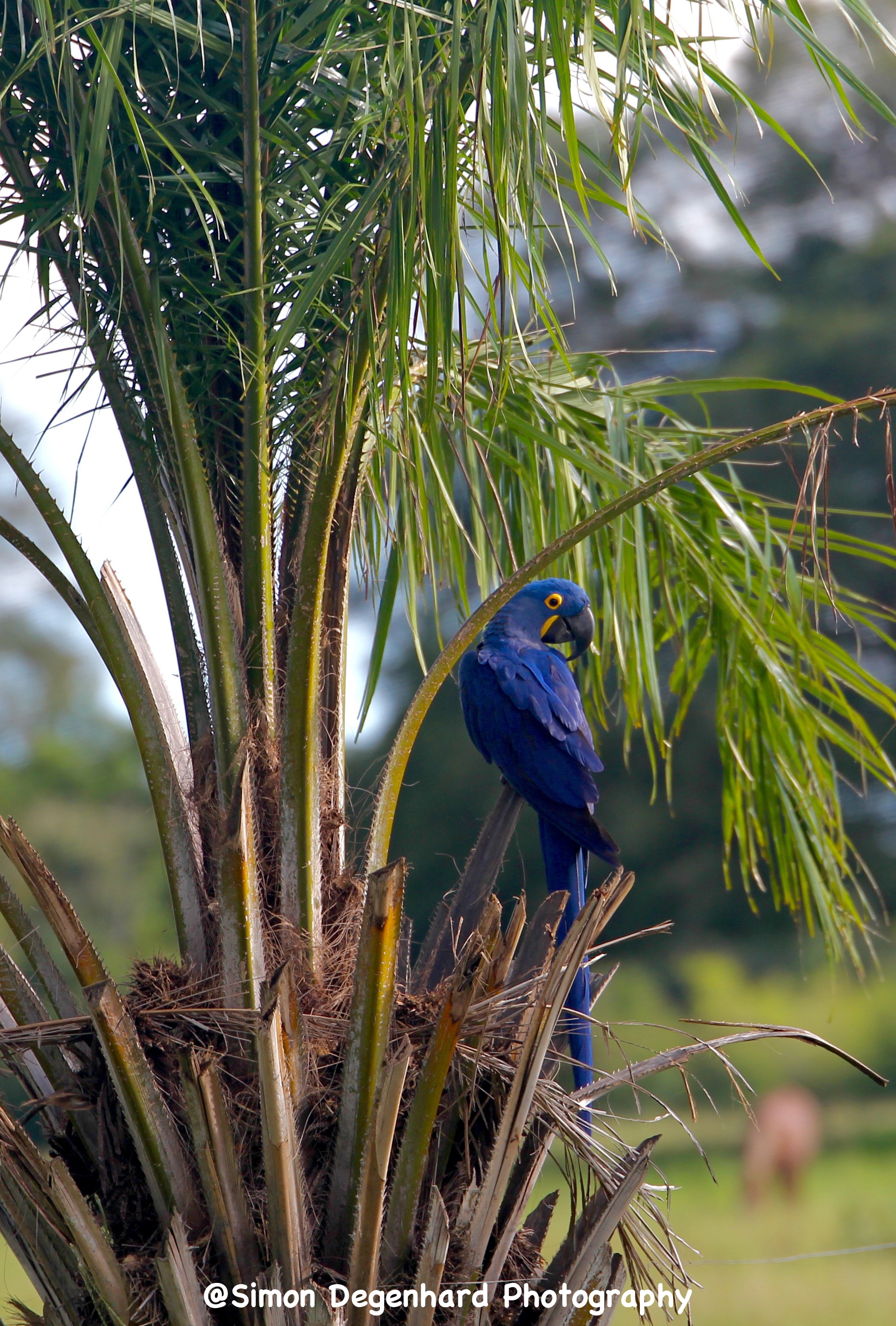