The Hawk-headed Parrot is the only member of the Genus Deroptyus and is found in the Amazon Rainforest. They are listed as CITES Appendix II. There are two sub-species -

Hawk-headed Parrots are about 35cm (14 inches) in length and weigh around 275 grams. Their life expectancy is around 40 Years. They mainly inhabit humid rain forests. They are a monomorphic species and therefore DNA sexing is required.

The Hawk-headed Parrot at our facility:

Housing and setup: We currently house and breed the Buff-Crowned sub-species of the Hawk-headed Parrot. They are all kept in traditional conventional style aviaries measuring around 4.8m x 1.8m x 2.4m. With half of the aviary having a reinforced concrete roof and the other half being wire mesh open to sky. There is a solid barrier between each aviary to separate the different pairs. We house our HHP’s in the part of our facility in which we house our amazons.

Well established adult pairs don’t destroy plants too much and hence we have live plants growing inside each aviary. The floor is half concrete and half soil. There are regular shoots of Sunflower, millet and other grains growing inside. The area is regularly watered, normally once a day and twice during summer.

The Nest box is placed inside the aviary. The size is 30cm (12 inches) square by 60-75cm (24 to 30 inches) in height. Wood shavings are used as the nesting medium. Each HHP pair is provided with two nest boxes and once the selection is made the second one is removed. The box has a steel ladder inside and an inspection door. Pairs often roost in the nest box even during the non-breeding season.

Wooden perches of various widths are used along with grooved concrete perches. They are not very destructive in nature. We regularly provide fresh cut branches with leaves and bark attached to keep them occupied.

For most of the year we provide a dry seed mixture consisting primarily of canary seed, millets and a small quantity of Sunflower and Safflower. We also add 15% to 25% of a commercially available large parrot mix to the above mixture.

We also feed soaked seed and sprouts; the mixture that we use consists of wheat and various pulses. These are given in three forms – (1) Only soaked (2) 1 day old sprouts and (3) 2 day old sprouts. These are normally provided on a three day rotation basis.

Cuttlefish bone is provided year round. We don’t feed any animal protein or fat to any of our parrots.

Like most of our large/medium parrots we keep newly acquired HHP’s in groups of same sex birds in enclosures with solid barriers. After a period of 2 to 3 months the single sex groups are then released into a large enclosure for natural pairing. If multiple birds of each sex are not available then the single separated male and female are introduced into a new enclosure together.

In case of the loss of male we find that during the breeding season the female will readily accept a new male but not vice versa. However if this occurs during the non-breeding season we prefer to keep the birds in visual isolation for 2-3 months before their introduction into a new enclosure.

Misters and sprinklers help first time breeders to get into the mood of breeding. Even more so when we have other breeding HHP’s and Amazons in close proximity.

Like clockwork, every year our HHP’s start to lay eggs in March. We harvest the first clutch of eggs. We allow them to incubate the second Clutch and then harvest the chicks. The 3rd clutch is left for parents to incubate and raise. Dry weather during this time increases the occurrence of dead in shell, so we spray generous amounts of water into their enclosures and a small quantity onto the nest box every day.

The clutch size is generally 3-4 eggs and incubation lasts around 26 days.

During artificial incubation the eggs tend to lose weight fast leading to dead in shell. So we weigh the eggs every other day. We try and ensure that total weight loss is less than 15%.

We have found that adding electrolytes to the drinking water for the parents helps the chicks to gain weight and significantly lowers the overall mortality rate. Males often help raise the chicks. However, it’s also not uncommon for the males to kill chicks and hence a close watch needs to be kept. We experienced this problem and it was solved by creating a mesh partition within the enclosure in order to keep the male away from chicks. The female will raise the chicks on her own provided the male is visible.

The hand feeding formula that we use is: ZuPreem - Embrace Plus

The leg bands used are: Stainless steel and size U - 9.5mm

It should be noted that chicks, like macaws, hatch with a fluid filled neck muscle. This should not be pricked or punctured, as it is part of their normal physiognomy.

From hatch until the 3rd dropping: Pedialyte solution is given (oral electrolyte solution) every 2 hours until we see 2-3 droppings, which is normally for around the first 12 hrs.

Day 1 to Day 7: The chicks are fed every two hours i.e. 12 times in 24 hrs. During this time we intermittently give them Pedialyte 3-4 times a day, which seems to prevent the babies from dehydrating. Mixing the hand feeding formula with Pedialyte directly caused slow growth in a few chicks in the past, so this was discontinued.

Day 7 to day 21: during the day the birds are fed every 2 to 3 hours, with the first feed being given at 6:00am and the last feed at 11:00pm. Except for if we have weak chicks, in which case we would feed them again once at around 2:00am. We continue giving Pedialyte water intermittently 3-4 times a day during this period.

Day 21 to weaning (>100 days): the number of feeds given is reduced as the chicks grow. Pedialyte water is still given intermittently during this period, though it is reduced slowly throughout until it is cut out altogether just prior to weaning.

During weaning we keep the chicks out in the sunlight from dawn until dusk. Papaya and orange are provided on a daily basis. The chicks, like their parents are very active, so the birds are either allowed to play outside or sufficient enrichment is provided to keep them occupied inside.

Hawk-headed Parrots are a stunning, but very rare species in Australian aviculture, with only a handful of breeders being lucky enough to hold them in their collections. We can only hope that breeding success is achieved more regularly in Australian aviaries in the future so that more Aussie aviculturists will have the opportunity to experience the joy of keeping these incredible birds. 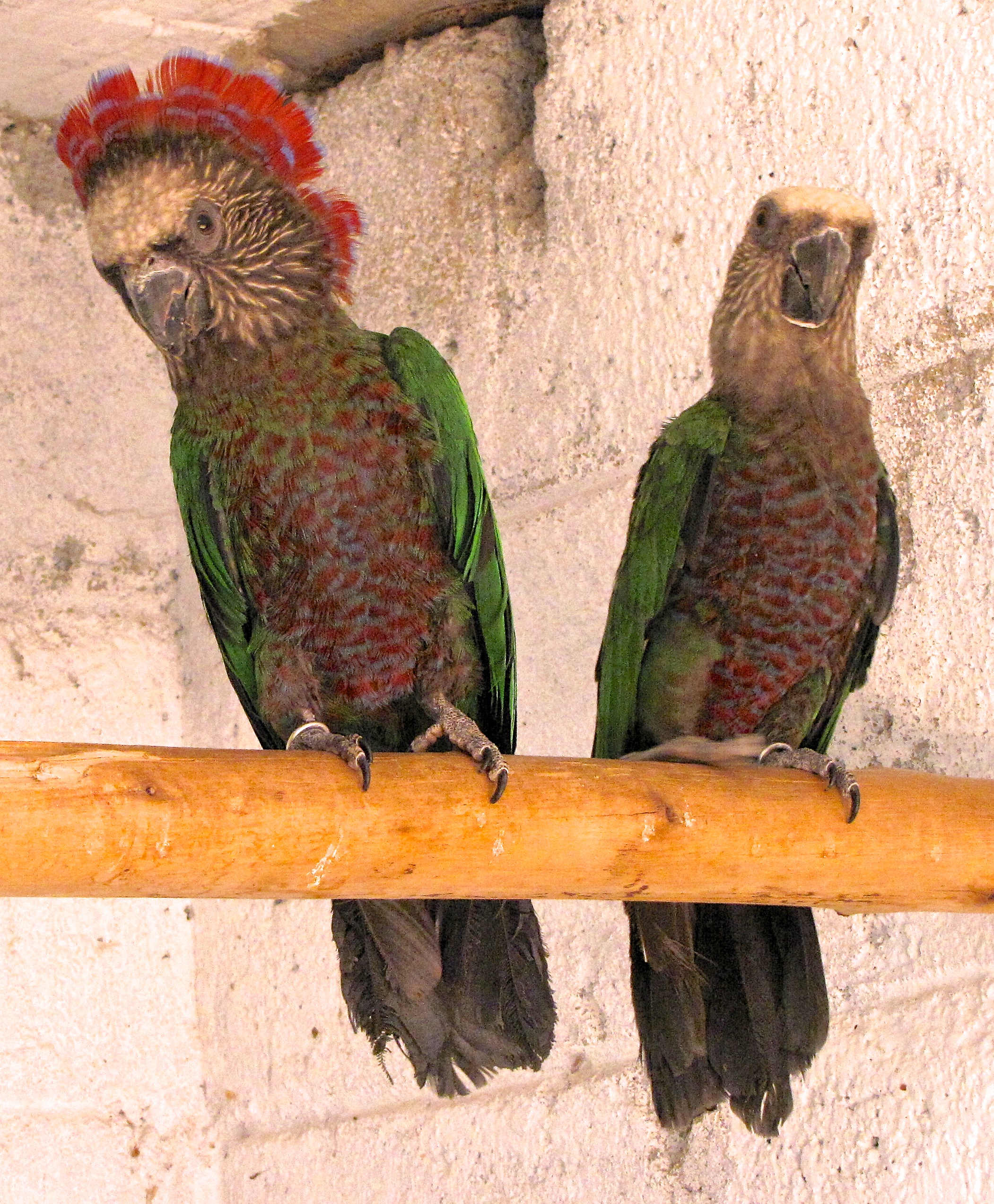 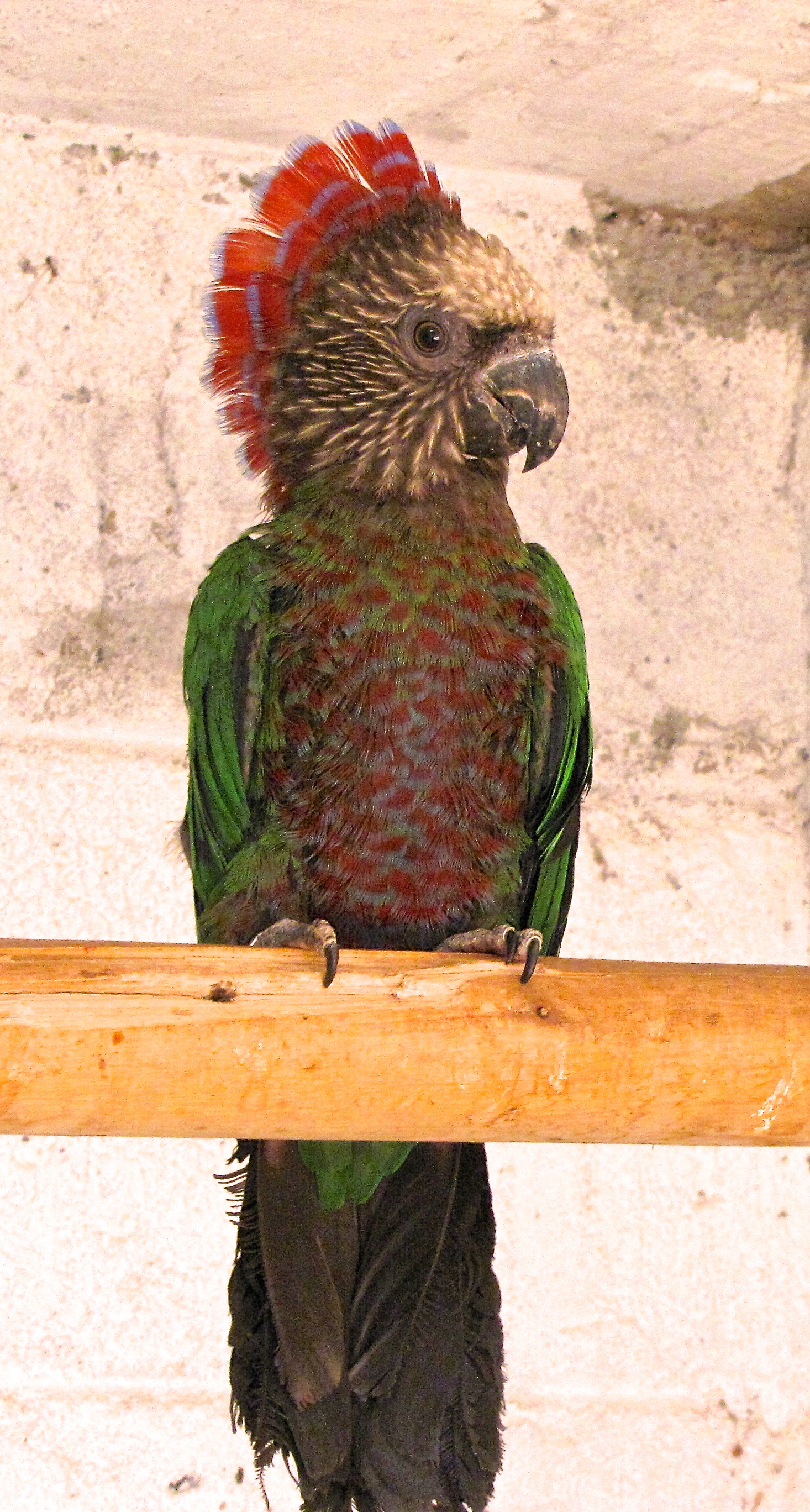 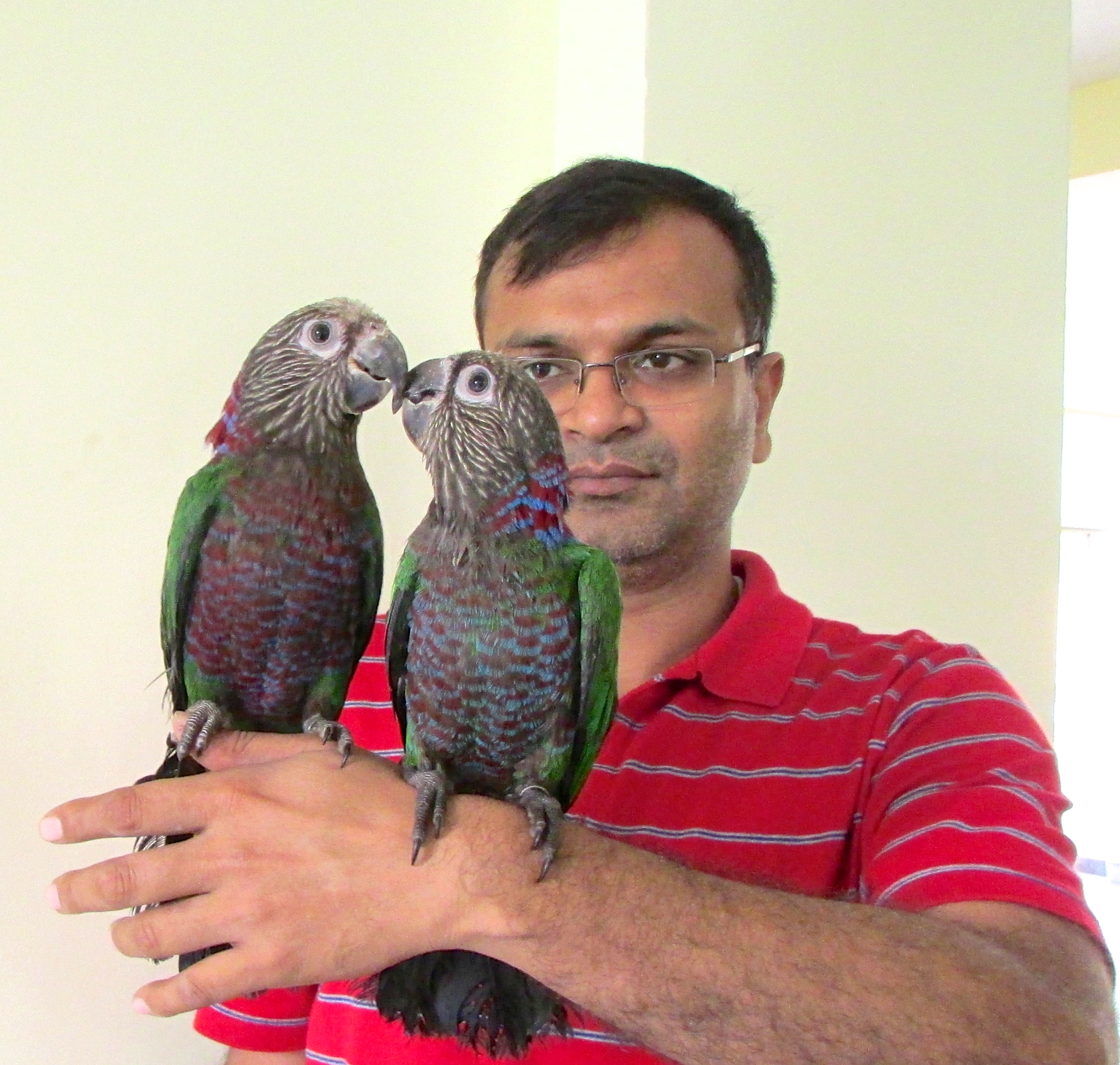 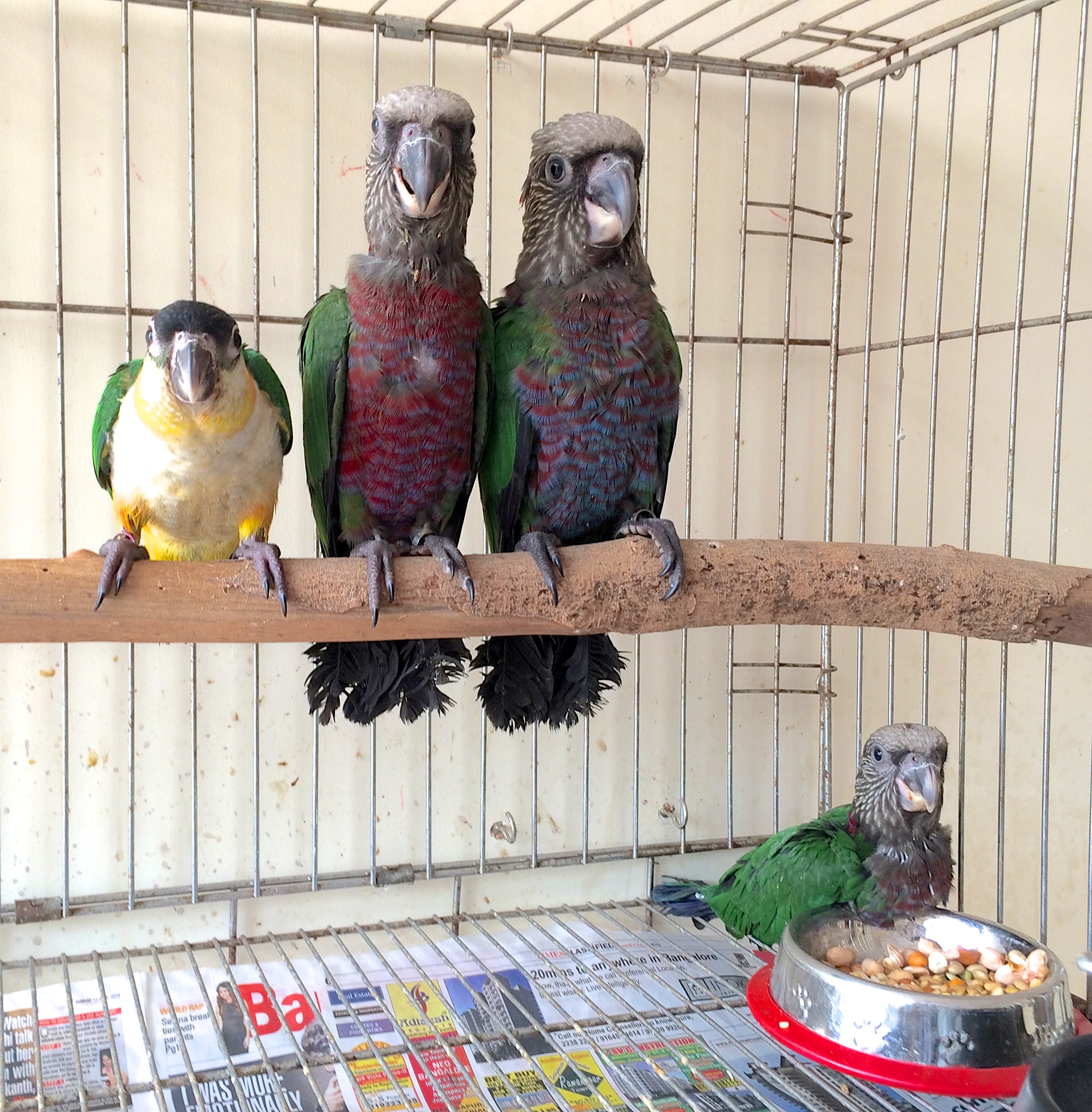 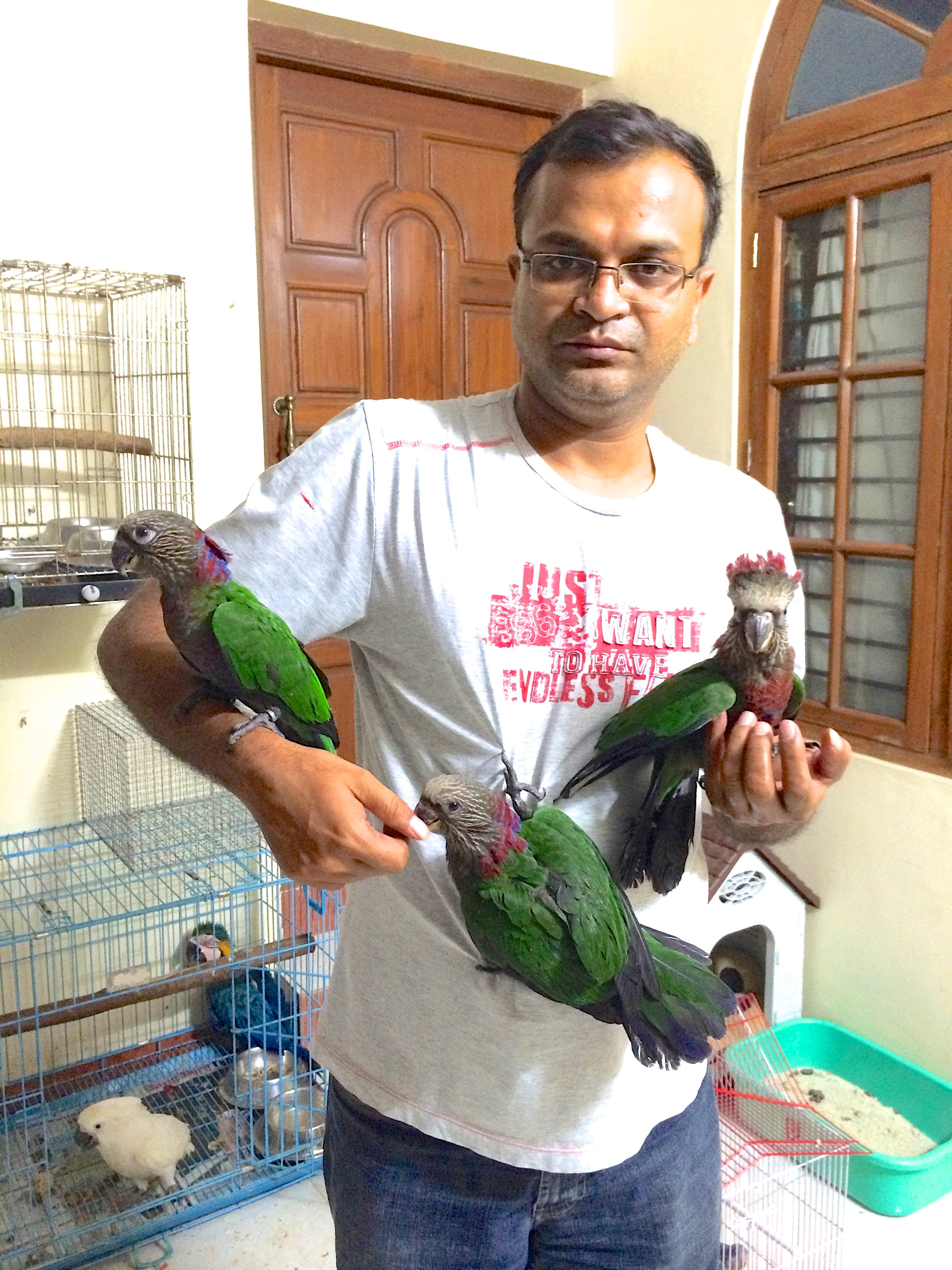