The word “little” aptly describes this beautiful lorikeet, which is the smallest member of the Australian lorikeet family. In the wild they are a bird that is more often heard than they are seen; they are so well camouflaged when clambering amongst the branches of a tall eucalyptus that it is often only their recognisable call that gives them away. They without doubt make a very attractive aviary subject.

Little Lorikeets are found on the east coast of Australia from south-eastern South Australia, around the York Peninsula, up to Cairns in far north Queensland. They frequent areas of Eucalypt and Melaleuca forest.

As their name suggests Little Lorikeets are a small bird, measuring approximately 150mm in length and weighing around 44-45gms. As can be seen in the accompanying photos they are a predominantly bright green bird with a brilliant red mask that extends to just past the start of the eye. The photos provide the best form of description.

The sexes are similar and surgical or DNA sexing is generally the only sure way to ascertain the true sex of a bird, although in some cases older males can have a larger and deeper red mask.

In the wild Little Lorikeets are generally seen in small to medium sized groups of around 6-10 birds, but sometimes more. They are nomadic by nature and will move between different areas depending on the availability of suitable food sources.

The following is taken from the NSW Office of Environment and Heritage website; “They forage primarily in the canopy of open Eucalyptus forest and woodland, yet also find food in Angophora, Melaleuca and other tree species. Riparian habitats are particularly used, due to higher soil fertility and hence greater productivity. Isolated flowering trees in open country, e.g. paddocks, roadside remnants and urban trees also help sustain viable populations of the species. They feed mostly on nectar and pollen, occasionally on native fruits such as mistletoe, and only rarely in orchards.”

They will often be observed feeding along side other lorikeet species such as Musk and Rainbow Lorikeets. Their flight is rapid and they will quickly move on in a somewhat noisy fashion if startled.

Littles can be housed as single pairs or as a colony of three or more pairs; they are also well suited to being housed in mixed collections.

When housing them as single pairs, suspended aviaries provide the most suitable form of accommodation; suspendeds are easier to manage and more hygienic. The minimum size I would recommend for a suspended aviary housing Littles would be around 1400mm long x 900mm high x 600mm wide, though they will certainly make use of more space if it is provided.

When housing them in larger conventional aviaries, as either single pairs or in a colony, they can be kept on their own or in a mixed collection of finches, softbills, pigeons, doves and other small parrots. In my experience they are very placid birds that do not show any aggression towards other birds; even the smallest of finches is safe in their company. Aviaries can also be planted as they will do very minimal damage to the greenery; they look particularly good when housed in this manner as they will tend to display more natural behaviour than if housed in non-planted aviaries.

Nest boxes should be left in the aviaries all year round, as the birds will use them to roost in. In aviaries housing colonies of Littles it is best to provide more nest boxes than there are pairs, as this will help to prevent any squabbling that might occur between the pairs.

It is not recommended to house Littles with Purple-crowned Lorikeets as the Purple-crowns can be more dominant and could cause the Littles unnecessary stress; there is also a risk of hybridisation between these two species.

Littles are fairly easy to cater for diet wise and will thrive on a diet similar to that offered to the larger lorikeet species. The basic maintenance diet for Littles usually consists of a lorikeet wet mix and fruit daily, as well as a dry lorikeet mix that is available at all times. Other breeders, including myself, have kept and bred Littles and other Aussie lorikeets very successfully without the inclusion of a wet mix, on a basic diet of dry mix and fruit, with the addition of sprouted seed and varying amounts of madeira, banana or carrot cake, particularly when they are rearing young. When feeding a dry mix only the fruit content of the diet must be increased to say half an apple and a quarter of a pear daily per pair, where as if a wet mix is being fed then a quarter of each would be more than sufficient. Not feeding them a wet mix provides two main advantages, firstly, it is easier and creates less mess and secondly, it eliminates the possibility of a wet mix souring during hot weather, which is particularly helpful to those who have limited time with their birds due to work commitments or similar. However, if you have time and prefer to do so, then feeding a wet mix is fine.

With regards to the dry mix, I offer it to my lorikeets in jars hanging from the roof of their suspended aviaries. The jars vary in size according to the species being fed; I find the small mustard, vegemite or pickled onion jars perfect for the smaller species. I have included a photo to give you a better idea of how I do this. In terms of the specific dry mix that I have found to work best, it is a 50:50 mix of Passwell Complete Lorikeet and plain rice flour. I believe that we tend to feed a diet too high in sugar to our lorikeets, which I feel often results in hyperactive and/or destructive behaviour; sure lorikeets are naturally very active, however aviary birds do not require nearly as much energy as their wild counterparts. Therefore, it is my belief that it is better to reduce the sugar content in the commercial mix by diluting it, and I have found that rice flour works well in this regard. As long as they are also receiving sufficient quantities of fresh fruit then their diet will certainly be providing them with enough sugar in my experience. This is especially the case if they are also receiving a wet mix.

During the breeding season when young are being reared the amount and variety of fruit and veggies fed should be increased and cake should be fed on a daily basis. I add a few drops of Passwell Liquid Gold or Vetafarm Breeding Aid onto the cake in the lead up to laying and whilst chicks are in the nest. Birds housed in mixed collections of finches and softbills have also been observed taking varying quantities of live food such as mealworms and maggots when they are feeding young.

They also relish the addition of fresh eucalyptus, grevillea and/or bottlebrush flowers as a regular natural supplement to their diet.

As with all birds fresh water should be available at all times.

Little Lorikeets tend to start showing signs of breeding activity from around the middle to the end of July; increased activity in the nest box will be noticed as will the commencement of courtship and mating behaviour. Littles tend to be rather seasonal breeders, with the majority of breeding occurring between August and early November, though there are always some exceptions and some pairs will breed almost year round.

A suitable nest box would measure approximately 300mm long x 200mm high x 200mm wide and these are generally hung horizontally. Some pairs prefer boxes with a natural spout, although this is not always necessary. As with all native parrots they will also breed in natural hollow logs, though this is not practical for nest inspection and cleaning purposes. A mix of fine untreated pine shavings and eucalyptus mulch makes excellent nesting material and boxes are filled to a depth of around 3-4cm. This material is changed when young are in the nest, on a weekly basis for larger clutches of 3-4 and on a fortnightly basis for clutches of 1-2 chicks.

The average clutch size is 3-4 eggs and fertility is generally good, with most pairs hatching all eggs in the majority of cases. The first eggs are usually laid between mid-July and mid-August. The incubation period is around 20-22 days, the majority of which is carried out by the hen.

Once hatching occurs both parents perform the feeding duties and they are very attentive towards the young. If the chicks are to be leg rung this should be carried out at around 2 weeks of age. The chicks grow rapidly and fledge at approximately 5 ½-6 weeks of age and would be considered independent a further 2-3 weeks after this. If the birds are housed in smaller aviaries it is a good idea to remove the young at this point to prevent any aggression being shown by the parents and to also give the parents the best opportunity to double clutch.

Sexual maturity is reached at around 12 months of age.

Little Lorikeets make wonderful aviary subjects; they are beautiful, full of character, relatively easy to cater for and not to mention, quiet enough for even a small suburban backyard. This combined with their suitability for inclusion in mixed species aviaries makes them a perfect addition to any collection; they are truly a “little Aussie gem”!

I would like to thank Richard Allen, of Sydney, NSW, for his assistance with compiling this article.

Australian Lorikeets, Experiences In The Field And Aviary 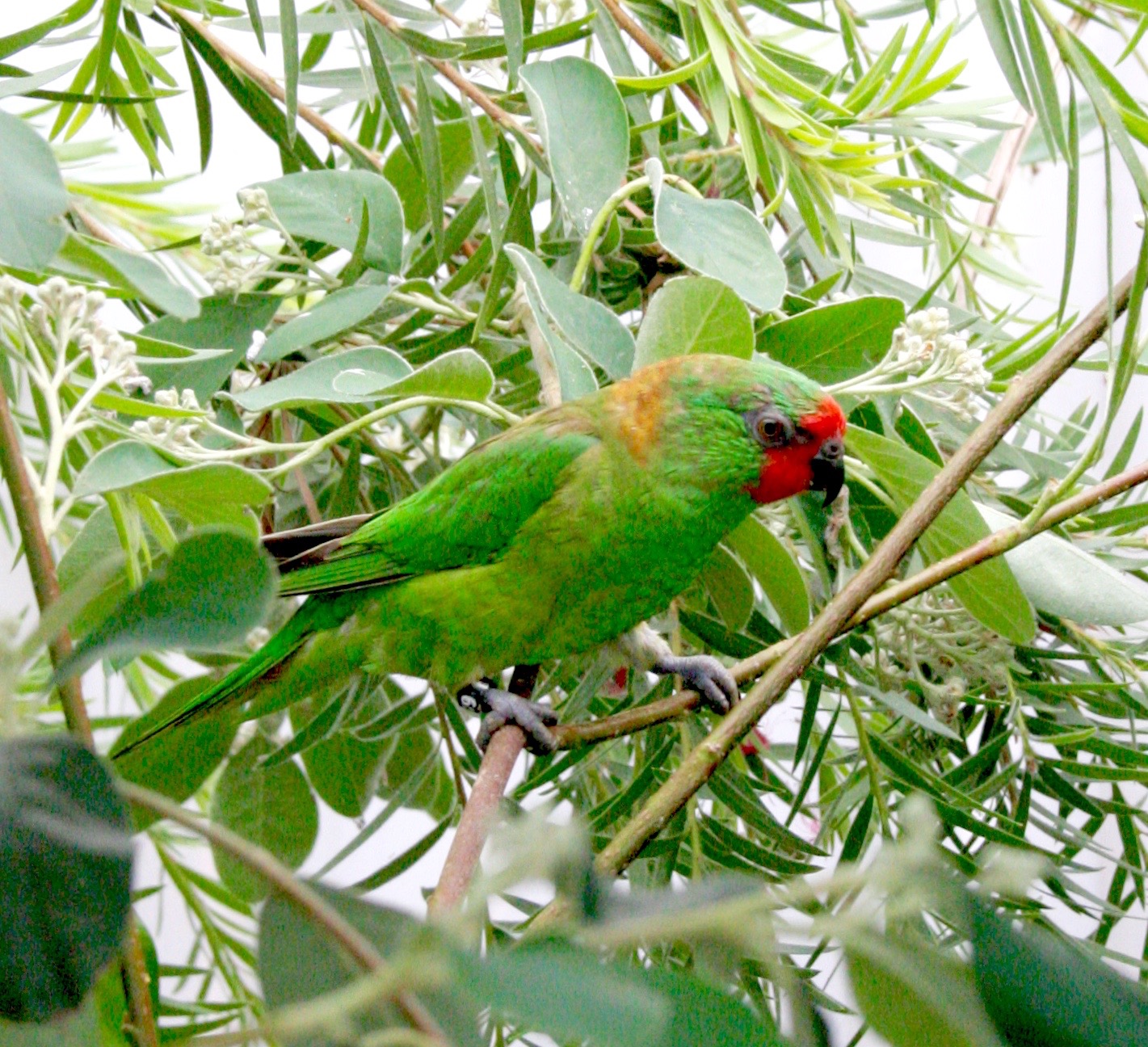 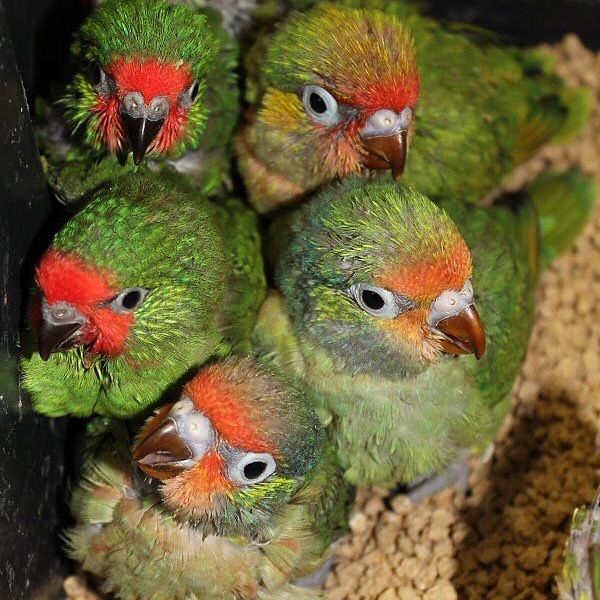 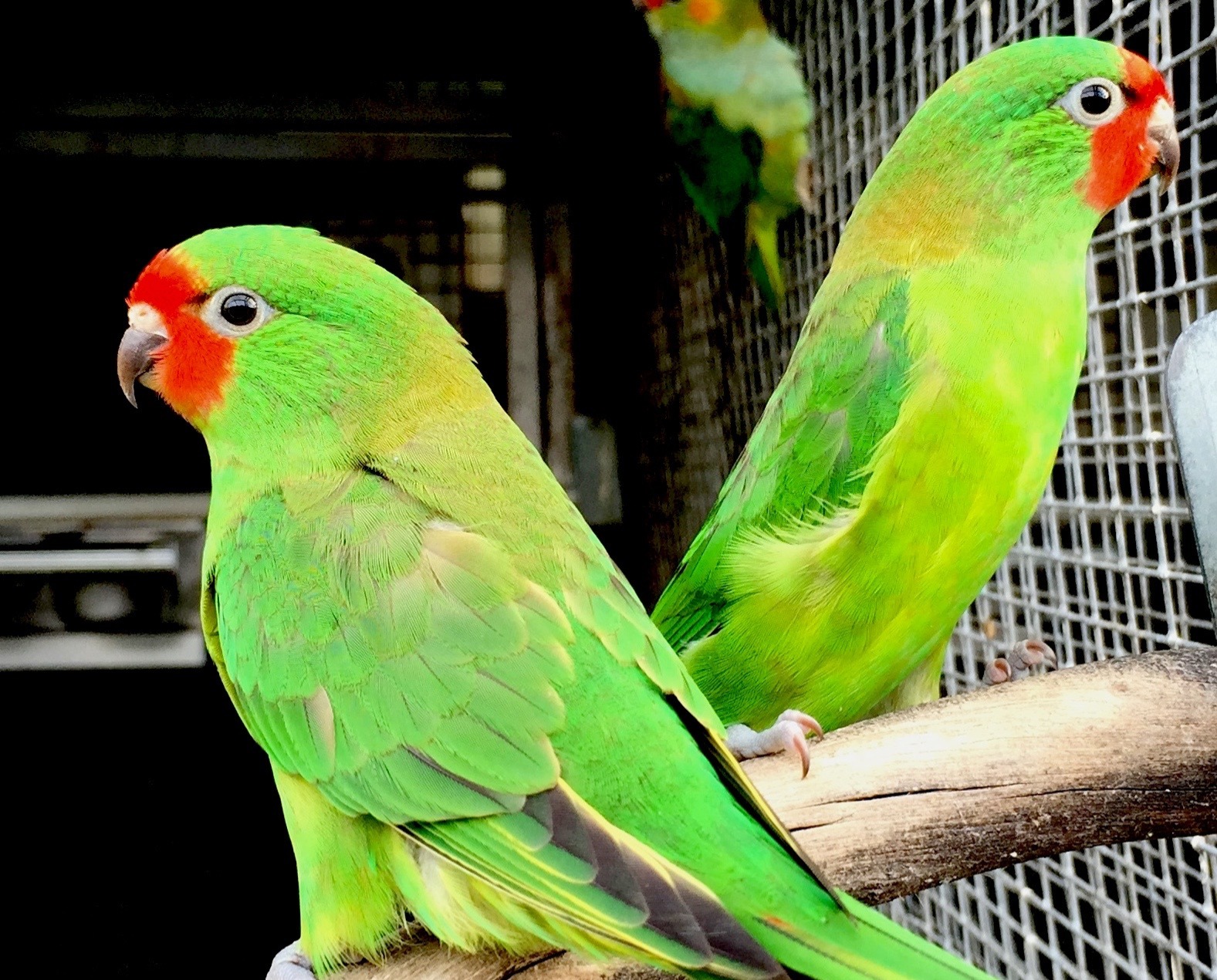 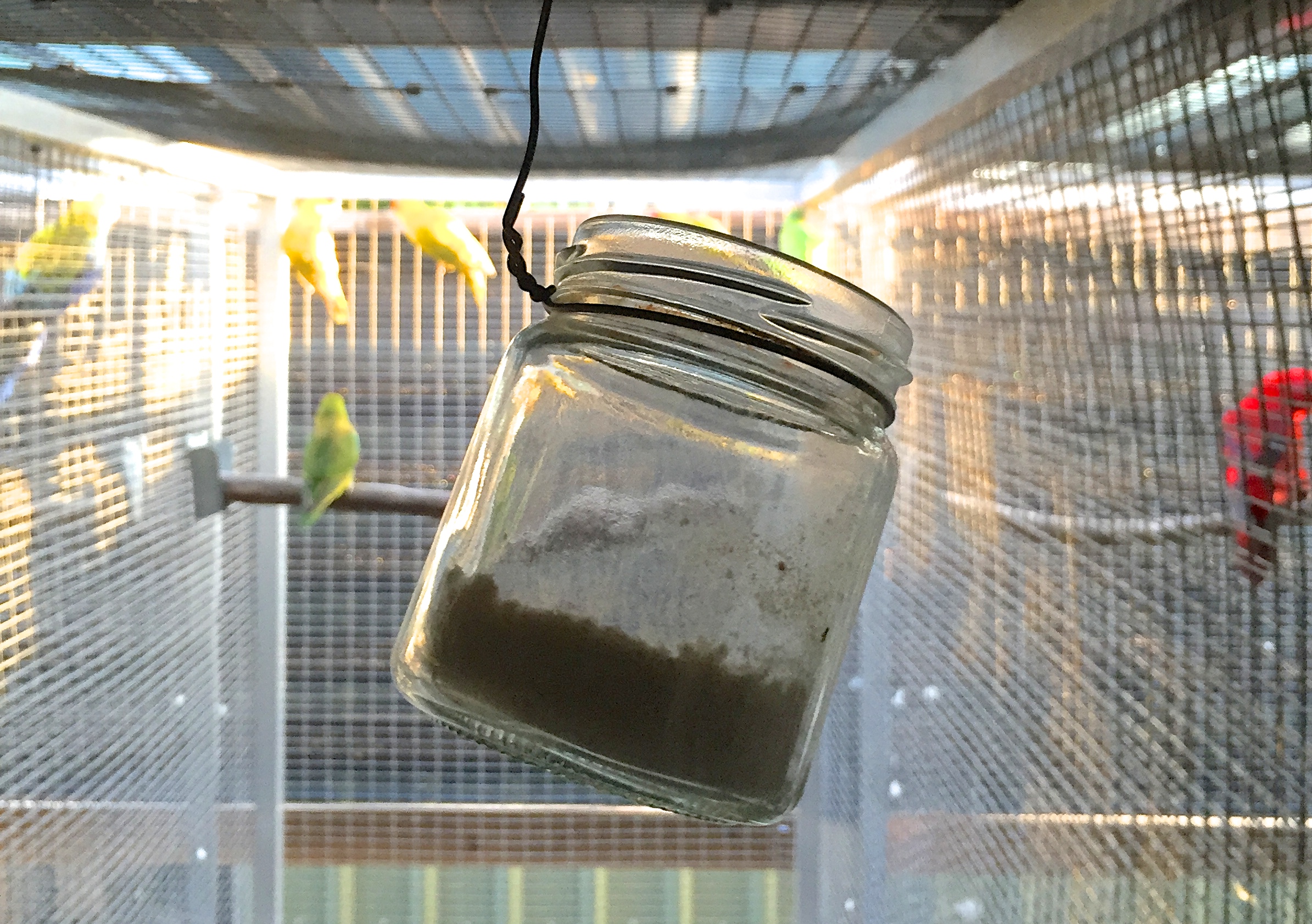 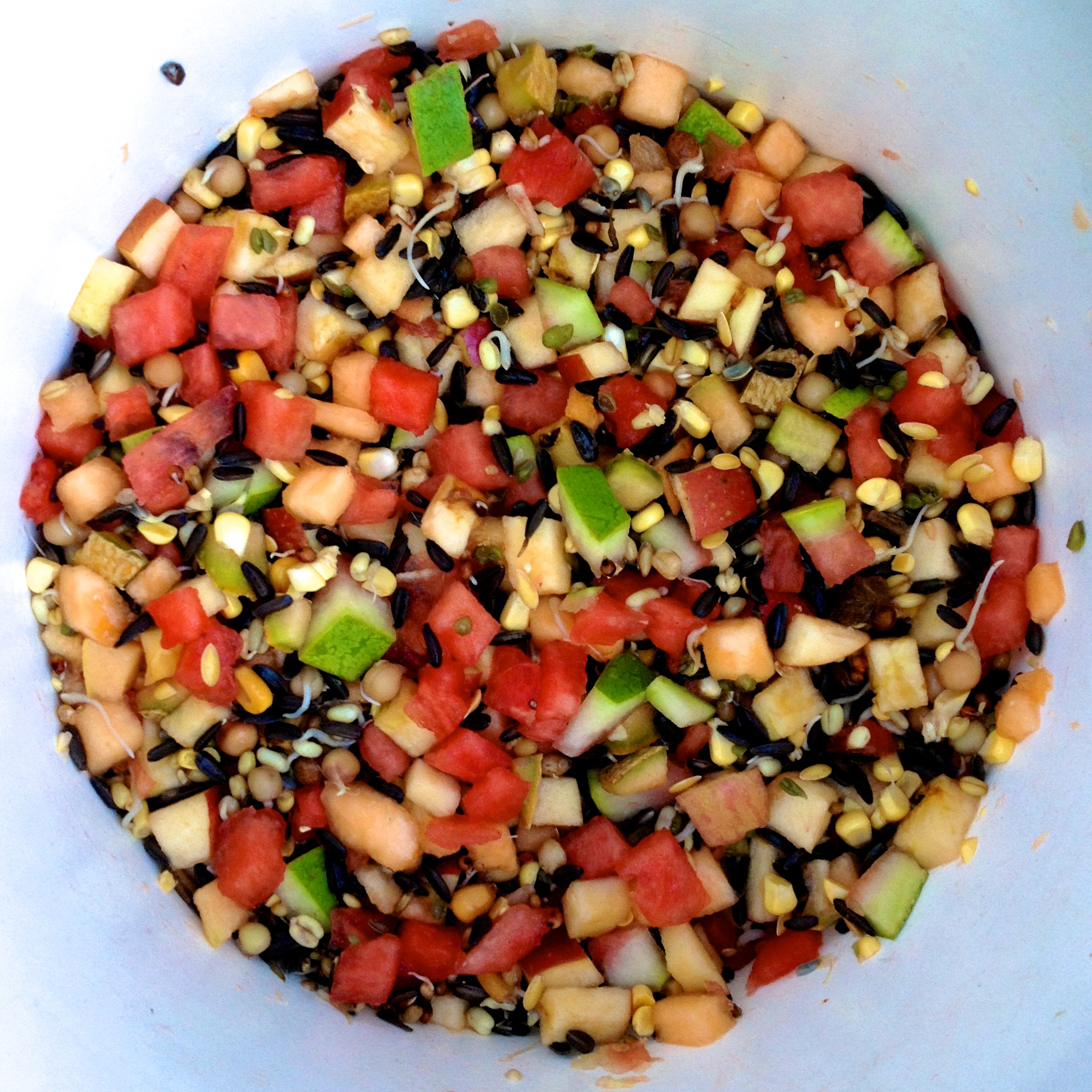