The Turquoise Parrot is an unassuming little Aussie beauty. I have found them equally suited to being housed on their own or as part of a mixed collection. They are quiet, not at all flighty and very easy to cater for. These attributes make them a popular choice for the beginner and experienced aviculturist alike.

The range of the Turquoise Parrot extends from northeast to central Victoria through eastern New South Wales and into eastern Queensland as far north as Maryborough. They generally inhabit areas of predominantly open woodland and scrub that extends onto open grassland. They are considered to be generally scarce throughout much of their range, though in some areas, particularly in Northern New South Wales and southeast Queensland they can be quite locally common.

Turqs are a small grass parrot that measure about 200mm in length. Cock turqs have predominantly green upper parts, a blue face and forehead, a prominent red shoulder patch and blue flight feathers. Their underparts are predominantly yellow, chest is green and their tail is green on top and yellow underneath. They have a black to grey beak and grey legs and feet. Hens are similar to the cock but they lack the red shoulder patch and are duller over all. Immature birds are a duller version of the hen. I must say that the accompanying photos do a far better job of doing their beauty justice, than any written description ever could.

Although they are not generally observed all that often throughout most of their range, Turqs, as I mentioned before can be locally common in some areas. When observed in the wild they are generally seen in pairs or small to medium sized groups, quite often whilst feeding on grass seeds and other vegetation. They can easily be overlooked in this situation due to their predominantly green plumage, which allows them to blend in with the vegetation very well. They are also rather quiet, which adds to the difficulty when it comes to spotting them.

Turqs are very easily catered for when it comes to providing suitable accommodation; they are equally comfortable in small or large aviaries, whether housed as single pairs on their own or as part of a mixed collection. They can also be bred in large cabinets and suspended aviaries with good success, though if they are to be bred in cabinets they should be spelled in larger flights during the off season.

It is also possible to pair a single cock bird to multiple hens over the course of the breeding season. If you pair a cock up with a hen early in the season he can be allowed to have two clutches with her and then he can be moved to another aviary to breed with another hen. Problems rarely occur when swapping pairs around and they generally bond to their new mate very quickly.

Turqs look particularly great when housed in planted aviaries, though if they are small or only sparsely planted they are capable of inflicting noticeable damage to plant foliage. Their chewing is far less noticeable if the aviary is heavily planted. As previously mentioned they are also well suited to being housed in a mixed collection, where they will co-exist happily with finches, pigeons, doves, softbills and other small parrots, though it is not recommended to house them with other members of the neophema family as aggression is likely to occur between the different species, especially between the cock birds, and it is also possible that hybridisation will occur. They are also not suited to being housed as a colony, as aggression will be seen between pairs and especially between the cock birds during the breeding season.

Aviaries can be constructed using either wood or metal for the frame work and lighter gauge wire can also be used as they are not big chewers, although the wire should be of a strong enough gauge so that it will keep any potential predators from gaining access to the aviary.

Turqs are not fussy eaters and they will thrive on a basic diet of small parrot mix, supplemented with green food and small quantities of fruits and vegetables. They will also take varying amounts of parrot pellets, I use Passwell parrot pellets.

I feed green food and various types of fruit and veggies all year round, the quantities are increased during the breeding season though. The varieties I feed include spinach, milk thistle, and chickweed, seeding grasses, apple, pear, cucumber, broccoli and celery.

During the breeding season I also offer between an eighth and a quarter of a piece of multigrain or wholemeal bread per pair per day. Soaked and/or sprouted seed will also be relished, though I do not feed either and instead I offer increased amounts of green food and fruit and veggies when they are breeding.

Cuttle bone and shell grit are also very important additions to their diet and as with all birds they should have access to either one or both of these at all times.

Fresh water is also supplied on a daily basis.

They are generally free breeders and can commence breeding from around 10 months of age, although you will generally get better results once the birds reach 18 months to 2 years of age. This is also better for the health of the birds, as allowing them to breed at an early age can cause and/or contribute to a number of issues.

The breeding season usually starts around mid-late July to early August, at which time you will see courtship displays commence. And if the climatic conditions are suitable the season can extend through until about the end of March or even early April.

The nest boxes that I have used measure around 200mm square x 300mm high, and they have a square spout that protrudes about 100mm out from the entrance hole, which is approx. 75mm in diameter. I have always hung the nest boxes horizontally. I have always filled the nest boxes with fine untreated wood shavings to a depth of roughly 40-50mm. and have generally hung them between 50-200mm from the roof of the aviary, depending on whether they are housed in a conventional or a suspended aviary.

The average clutch size is between 4 and 6 eggs. Incubation is carried out by the hen and lasts around 20-24 days and fertility is generally good. After hatching the young grow rapidly and are cared for by both sexes. When the young are in the nest they seem to have very long legs when compared to their body size, but everything is in proportion by the time they fledge. Fledging occurs at 5-6 weeks of age and the young are independent around 3-4 weeks after this. The young should be removed once they are independent to avoid them from being persecuted by the cock.

As previously mentioned, it is possible for cock birds to be mated to more than one hen over the course of the season, but they should only be mated to one hen at a time as trios rarely prove successful.

An incredible array of mutations (and also selectively bred colour variations) have been produced over the years. I have included a couple of images here depicting the red-fronted (this has been produced via selective breeding) and the yellow mutation of the Turquoise Parrot. A follow-up article focusing on the various mutations will be published here in the not too distant future.

Turquoise Parrots make wonderful aviary subjects, with their suitability for being housed as single pairs or as part of a mixed collection making it possible for most breeders to include them in their collection. This coupled with their beauty, quiet nature and their ease of maintenance makes them a perfect bird for the beginner and experienced aviculturist alike.

Their Mutations, Care and Breeding 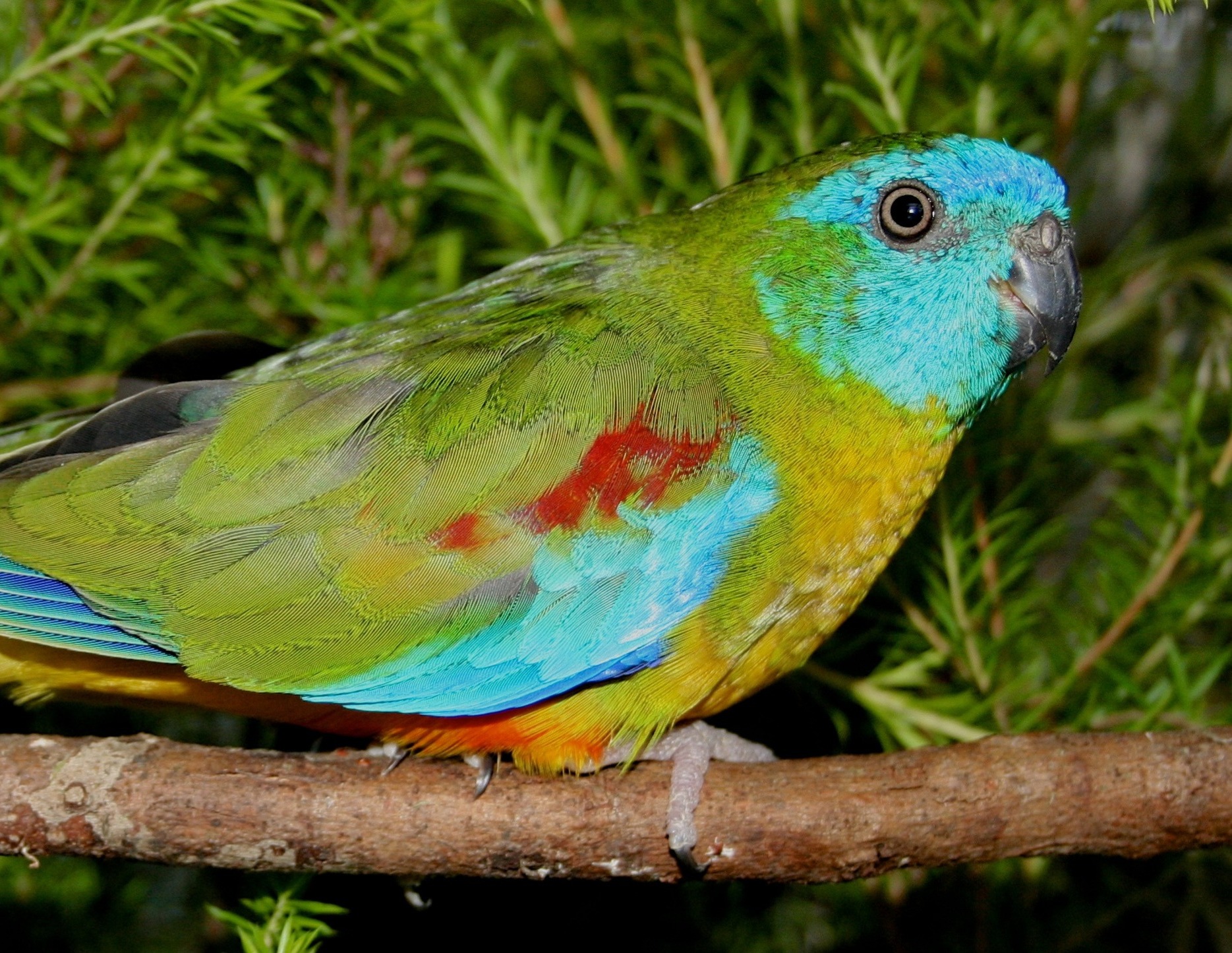 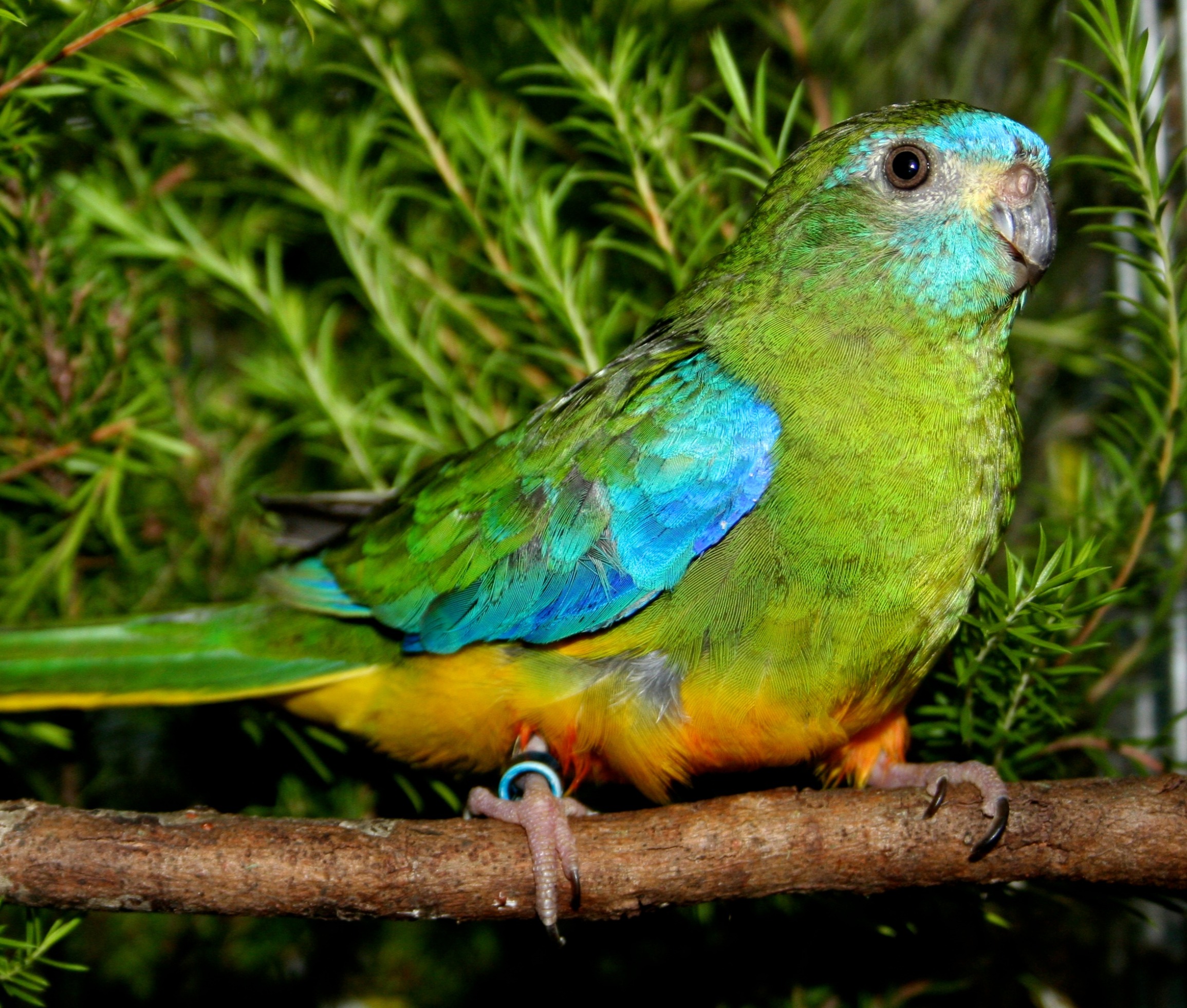 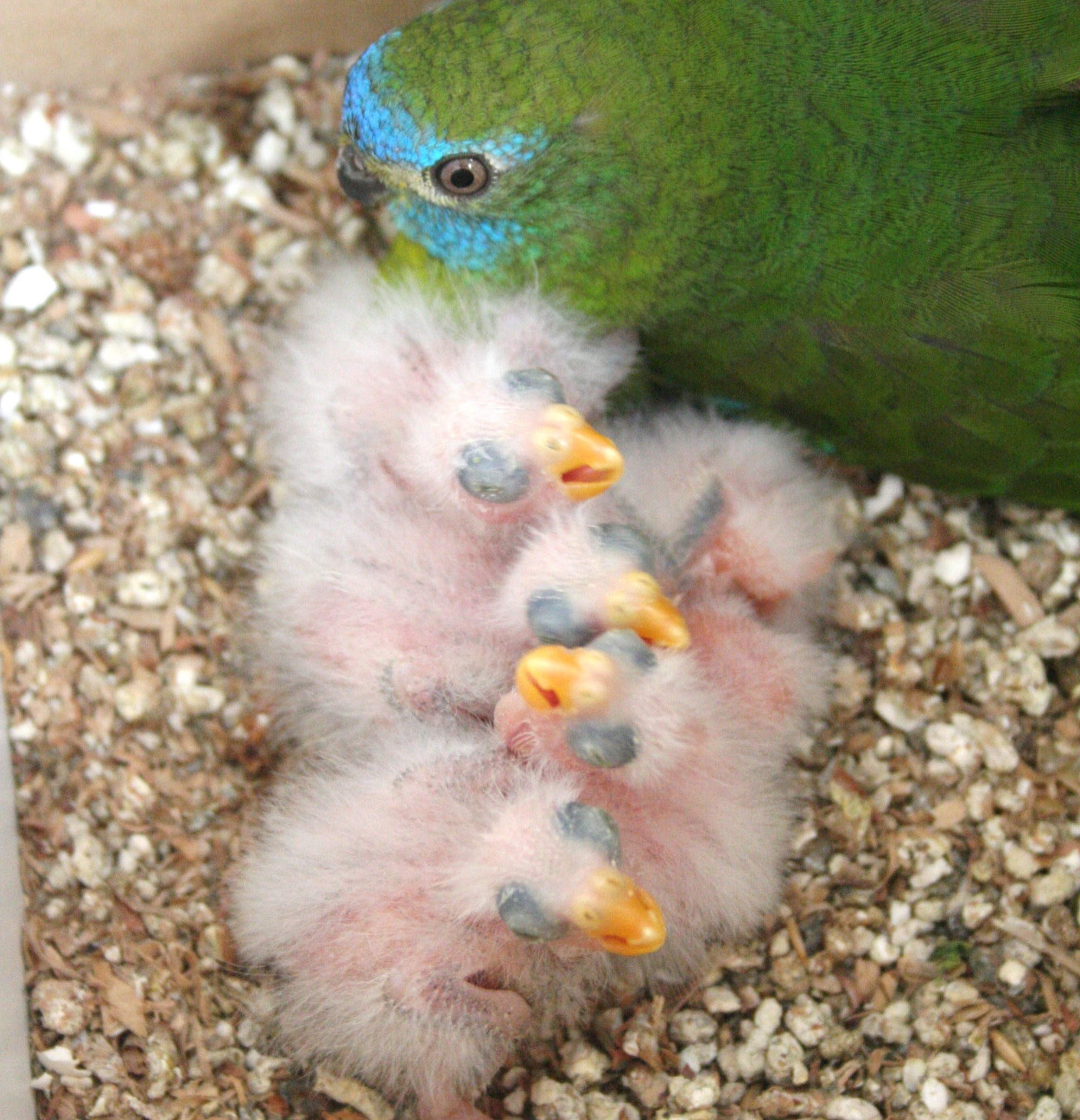 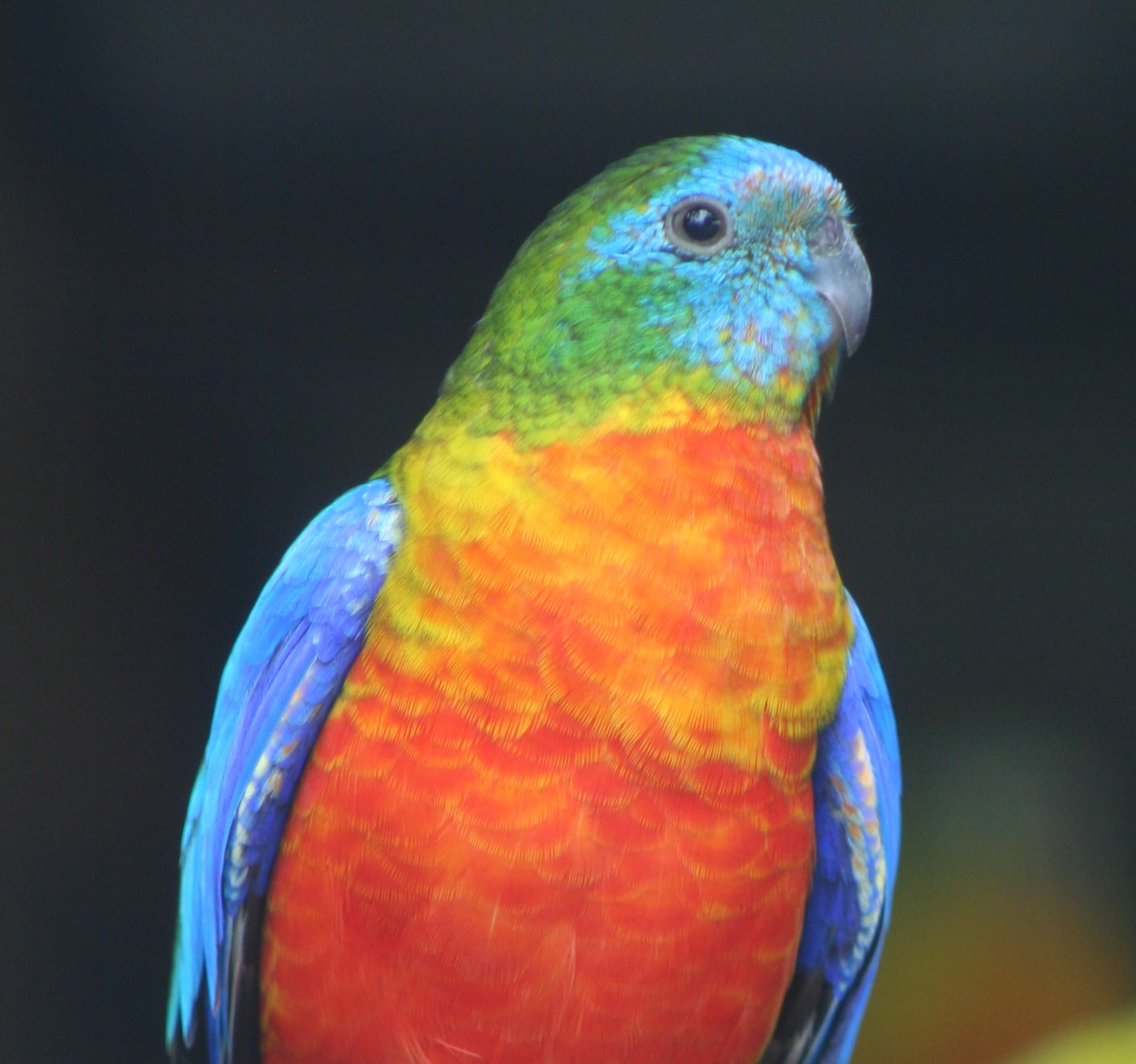 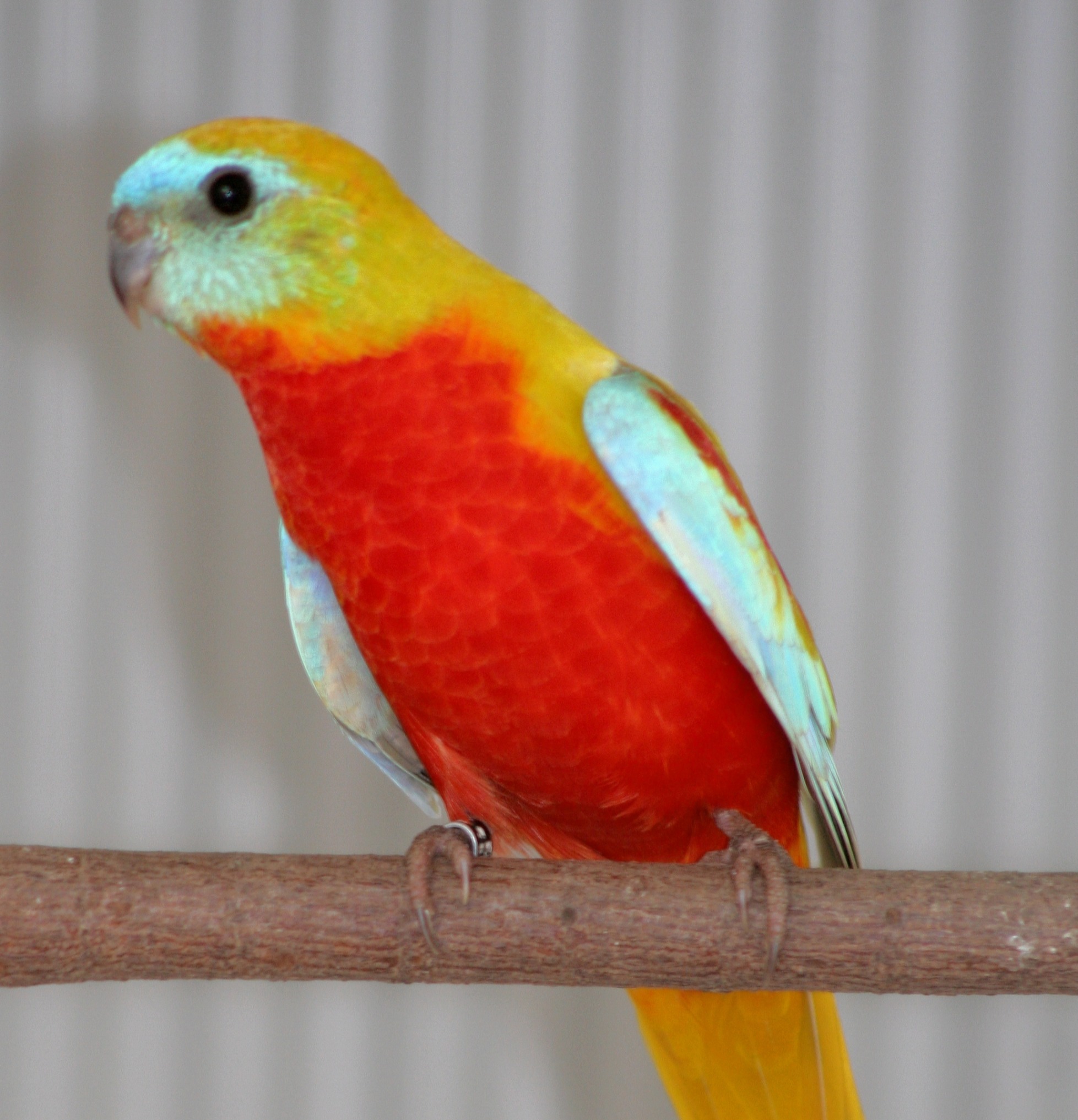